Hey gang.
I have what is to me at least, an interesting problem.
Vehicle in question - my green estate - has had a varied career and anything is possible.
While I have tried to return everything to how it should be in the suspension, I still have an odd problem.

Symptoms;
When going over a bump at speed, which causes the front suspension to compress almost fully, the car veers to one side.
I feel that it veers to the left on compression, and to the right on rebound.
I guess that figures, as whatever geometry is out of whack will reverse its behaviour depending on whether the suspension is going up or down.
I have investigated the steering and found that one tie-rod end had failed in the last 2 weeks, but having replaced that and adjusted the toe-in to zero, the problem persists, although perhaps is less developed.
The steering rack is definitely a later type, but I noticed when adjusting the toe-in that the tie rods are differing thicknesses.

It is one of the only possibilities I can think of which would cause these symptoms.
The other would be an eye bolt whose bush was worn to bits causing the lower arm to move in and out, although they both look fine.

All theories gratefully accepted.
The judges decision will be final.
Send no money...

It is otherwise a joy to drive...

Measure all the suspension components, and check they are the same on both sides. I'm sure you wouldn't have put anything on back-to-front or upside down.

Can you measure the castor angles? Are they the same both sides?

Are the lower "tie rods" the same length? Same type of trunion? No bent steering arms? Has it had a knock in the front? A "friday" car with out-of-square suspension mountings? 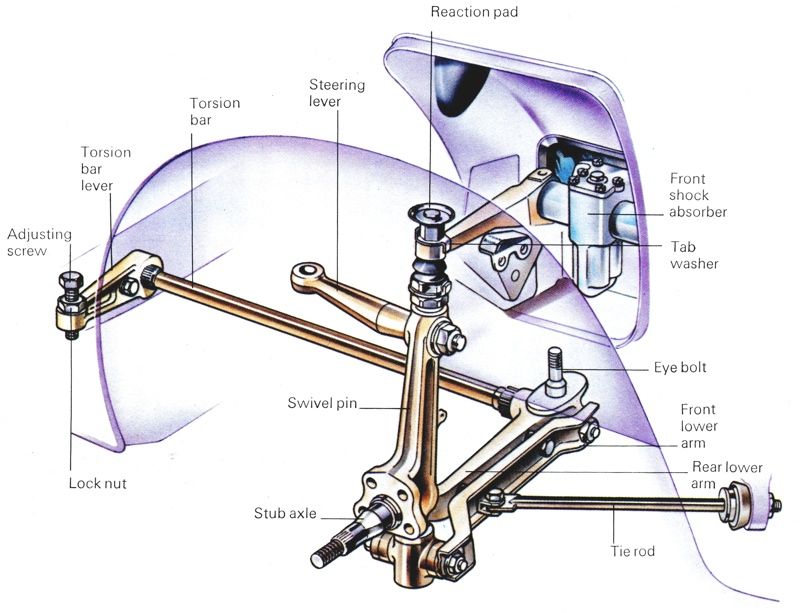 Nothing gets the ladies hotter than software development analogies. Leonard Hofstadter - The Big Bang Theory.
Top

If Track rods are different sizes i would assume the track rod end would be a different part. Bump steer is usually caused by wear in the system or bad design the rack ball joint should run in a imaginary line drawn through the centre of the upper and lower arms. The track rod lengths will will depend on where you have set the track. Ideally the centre dimple in rack under rubber band will be in centre. I would set Toe to 3.00mm in as this gives some stability. That said the original design was for crossply tyres some of the geometry doesnt make sense on modern radial tyres. Try measuring the bump steer by removing the rear bolt from torsion bar should allow you to jack suspension trough its travel end see whats going on. Carry out full front Geometry set up and measure Castor Camber & toe also check KPI and Toe out on turns this will show up if something is bent.
Dave
Top

Ken - I did find that some Ital tie bars were 1/4” longer than earlier Marina ones. That would have the effect of changing the castor angle, if you had a mismatched pair. Of course it may not be deliberate, just BL/Austin Rover tolerances.
Chris

Thanks for suggestions all.

The steering rack has not yet been disturbed in my ownership, as it has good boots and no play in the left bush, so any odd parts would have been previously fitted.
The rest of the setup is exactly as I have done all previous Marinas, so to have a weird symptom suggests to me that something is not equal within the entire assembly.
No signs of physical damage, but the entire front suspension had been changed to Mk1 type before I got the car.
The lower arms were correct, but the uprights featured the early top joint and shock absorbers.
I kept the uprights but changed to the later swivels and shocks.

So.
Were there any dimensional differences between early and late uprights as regards the steering 'levers'.?
I have used late trunnions and both castor and camber appear normal.
There seems to be a lot of steering deflection (to the left..) on the left front wheel as the car is raised off the ground...

Next step would appear to involve removing the rack.

Just to clarify a few things.

What I call a "tie-rod" is what connects the end of the steering rack to the steering arm on the upright.
These are the items I am treating with suspicion as being of different lengths, and they are of differing thickness.
I assume that a Mk1 tie-rod may be longer if the rack itself was shorter..?

What Bryan's diagram shows as named a tie-rod I would call a radius rod, because that is what it is.
So named because of the included angle it is mounted at in relation to the lower arm.

Ah, I was referring to rod that runs forward from the lower suspension arm to the chassis rail. I call the articulated arms on the ends of the steering rack the track rods.
Chris

Yes - got that Chris, hence the clarification.

Every diagram I pull up labeling parts of steering systems disagrees with every other one...
http://www.kilroy.co.nz/cars/
Top

In view of your past revelations about the quality of work, I wouldn't be surprised if they've used odd parts and not assembled them correctly.

I await with baited breath your revelation of what is hidden behind those good boots...
Bryan
Auckland NZ

Nothing gets the ladies hotter than software development analogies. Leonard Hofstadter - The Big Bang Theory.
Top